Home » Karts » Danny Formal in the eyes as one of this generations top karters of all-time.
19
Dec 2016

Danny Formal in the eyes as one of this generations top karters of all-time. 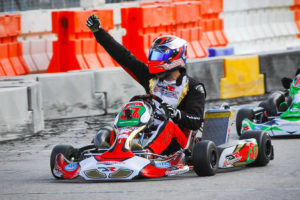 In a continued effort to highlight the many outstanding performances by drivers around the country, eKartingNews.com is proud to introduce the ‘Driver of the Month’ program. Each month, the staff at EKN will determine the one driver who stood out above the rest and give the viewers a chance to know exactly what they accomplished and who they are.

The racing season ends every November with the running of the Superkarts! USA SuperNationals. Over the last decade, it has become the marquee event of the year, with teams, drivers and karting fans all planning to compete or just attend. It has become the event to win, and the 20th edition was made even more special with SKUSA adding in a $20,000 bounty for former winners in the three headline categories – S1 Pro, X30 Senior and KZ2.

Prior to the event and throughout the practice and heat racing, a number of former winners were singled out as potential winners at SuperNationals 20 in Las Vegas, outside the Las Vegas Convention Center. Among them was 2015 SuperNationals S1 winner Danny Formal. The DRT Racing / DR Kart pilot dominated the entire SuperNationals 19 event, leading from qualifying to the final lap on SuperSunday to give the former Florida resident his first SuperNats triumph.

The perfect score did not carry over from 2015, as Formal was nipped by longtime Florida rival AJ Myers and SKUSA Pro Tour title contender Jake French in qualifying to open up SuperNationals 20. The Costa Rican and his DRT Racing crew remained focused on the main objective, which was winning on SuperSunday. Formal retained the third position through the opening heat race, moving up one to finish P2 in Heat #2. The third heat saw Formal lead all 12 laps to edge out two-time heat winner French for the race win. Those results put French and Formal on the front row for SuperSunday main event.

The stage was set for the 25-lap race to decide the winner of the SuperNationals 20, and the champion of the SKUSA Pro Tour title chase. Formal entered the event leading the championship, losing 10 points in his advantage to French through qualifying and the heat races, making it 65 points separating the two as the main event began. Formal excepted the challenge and jumped out front right away with the holeshot to begin the SuperSunday feature. The 25-lap race was uneventful as Formal kept a consistent pace throughout the duration, holding Myers back enough to not challenge for position. Formal led all 25 circuits to claim his second straight SuperNationals victory. The win netted him the $20,000 bounty, while also locking up SKUSA Pro Tour championship worth $3,000 in cash and another $3,000 as part of the ‘Circle of Champions’ program toward the 2017 season. In addition to the #1 SKUSA plate, Honda/HPD awarded Formal with a champions award toward competition in the F4 US Championship, bringing his event total winnings to roughly $44,000 for his efforts in the S1 category.

Formal has told EKN he plans to defend both the SuperNationals title and the SKUSA Pro Tour championship in 2017, in addition to racing the Florida Winter Tour Rok Cup program this winter. Back home in Costa Rica, he will be racing in the CTCC program while also the country’s karting championship. The last two performances at the SuperNationals added to an already stellar racing resume has certainly put Formal in the eyes as one of this generations top karters of all-time.

Chassis: DR Kart
Engine/Engine Builder: Fisher Racing Engines
Sponsors: DRT Racing, Hyundai, IMC
Series You Compete In: SKUSA Pro Tour, Florida Winter Tour, Costa Rica Touring Car Championship
Years Karting: 15
How did you get started in karting? My dad used to race when he was young!
What has been the high point in your racing career? Winning the SuperNationals twice, placing 5th at the Rotax Grand Finals in 2010
What are your goals in racing? To make a good living out of it!
In a few words, how would you describe your driving style? I think I would say curb jumper (laughing) aggressive, smart
Funniest moment at the race track? When I won this year SuperNats, I won a bet to shave my friends head 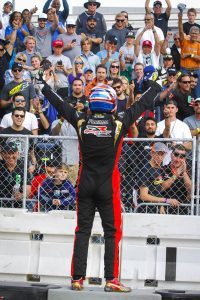 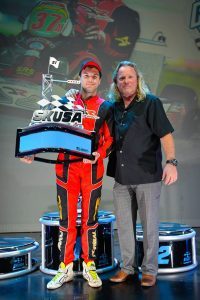