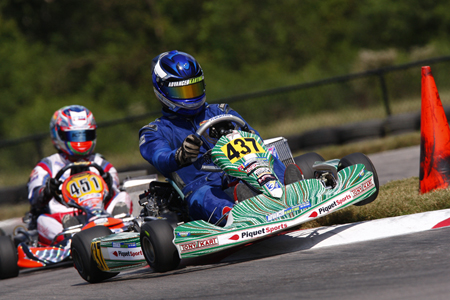 Heading to the NOLA Motorsports Park near New Orleans, Louisiana, site of the 2013 Rotax Max Challenge Grand Finals this November, Advanced Karting and 37RacingEngines would be at the forefront of some stiff competition. Making his mark against a field of international pilots this past weekend, multi-time Team USA member Daniel Formal would leave the DD2 Rotax Pan-American Champion. Running under the 37RacingEngines banner, rookie senior pilot Jack Weprin would also earn double victories the weekend prior during the Texas ProKart Challenge finale.

“After taking on the DD2 category for the first time at this year’s US Rotax Nationals, I am so proud that Danny was able to prove himself once again,” noted Donald Formal, owner of Advance Karting. “With the World Finals coming up in November, I am confident that Danny will be able to fight for the world title.”

Leading an impressive field in qualifying on Friday, Formal would secure the pole position during a late run in the timed session. With the premier starting position, Formal would have the upper hand for the three heat races to follow. Holding his competition at bay during the opening laps of heat one, Formal would lose his floor pan on the high curbs, and the four-time US Rotax champ would end his race in third.

Flexing his muscles in heats two and three, Formal battled multi-time race winners and world champions but would not be outdueled. Taking victories in both heat races on Saturday, Formal would secure the pole position for Championship Sunday’s prefinal.

The prefinal would go exactly as planned for the 2013 Rotax Max Challenge United States Grand National champion as he cruised to victory by 2.234 seconds. Setting up an inside front row starting spot for the main event, the 37RacingEngines powered driver would look to add another major karting victory to his already impressive resume.

With a ticket already secured for the Rotax Max Challenge Grand Finals later this season, it was all or nothing for Formal when the race went green. Taking the point early and never looking back, the multi-time national champion went on to take another dominant victory. Forgoing his Grand Finals ticket from the US Grand Nationals, Formal will now join Team USA as the Rotax DD2 Pan-American Champion.

The week prior to the Pan-American Challenge several drivers would take to the NOLA Karting facility on a modified circuit for the final round of the Texas ProKart Challenge. With Formal not attending the event, Jack Weprin would race under the 37RacingEngines banner in the Rotax Senior category and not disappoint. Working hard to get up to speed early in the weekend, Weprin proved to be the class of the field in the main events taking both final victories on the weekend.

Formal continued, “The 37RacingEngines program is beginning to grow. We have already begun building customer engines for the 2014 Florida Winter Tour and welcome new customers to the program. With a complete engine building program and national level race team, Advanced Karting and 37RacingEngines are looking for drivers.”

Advanced Karting, 37RacingEngines and Daniel Formal would like to thank Helio Rodriguez, Fernanda Demello, Tony Kart, Rotax, MAXSpeed Group and the Weprin family for all of their efforts and support in the past month.