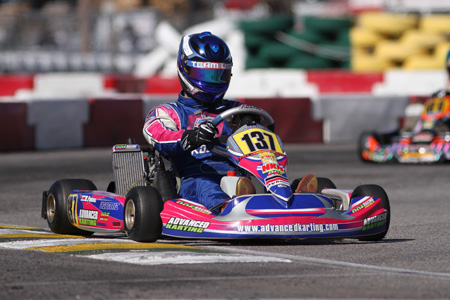 Looking to start the 2011 racing season off right, Advanced Karting pilot Daniel Formal would contest in the Rotax Senior class at the opening round of the Formula Kart Productions Florida Winter Tour. Racing against champions from multiple nations and countries, Formal left the Orlando Kart Center with a pair of podium results including a demanding race win on Sunday.

“This was the perfect way to start the season,” expressed Formal after the event was over. “The competition is tough here and I have been looking forward to this since finishing fifth in Italy. My goal is to make it back to the world finals and have another chance at becoming the world champion.”

Starting off with some of the quickest practice times of the week, Formal and his Advanced Karting prepared Kosmic Kart would look to make a run for the pole position during Friday afternoon’s qualifying sessions. As weather moved into the area, Formal looked to get up to speed in the rain soaked time trials but could only manage a fifteenth place run for Saturday’s event. Making the necessary changes for the second day qualifying run, Formal displayed his superior driving skills as he turned the quickest lap in the rain and managed to score the pole position.

Saturday morning would provide nothing but sunshine to the Florida Winter Tour competitors and Formal was excited and ready for the racing action. Starting inside row eight, the Florida racer tore through the top ten karts in the prefinal to take the third position. Looking to improve in the main event, Formal battled wheel-to-wheel with some of the worldâ€™s best pilots coming home with a solid podium result and a great start to the 2011 racing season.

Sunday would provide a much different view for Formal as he would be at the front of the field from the drop of the green flag. After claiming the pole position in Friday’s first qualifying session, Formal went on to dominate the prefinal taking the win. With a distinct advantage for the inside front row starter, Formal would look to turn that into victory under the Florida sun.

When the green flag flew for the start of the main event, Formal and four competitors put on a show during the opening laps. Making pass after pass, all five drivers battled hard and did not give an inch but also never put a wheel wrong and did not make contact. When the dust had settled, it was the youngest of the bunch that emerged as the top dog as the #137 of Formal was at the front of the field. Turning some consistent race laps, Formal drew away from the rest of his rivals to take the win.

Formal continued, “I always wanted to race against guys like Marco Di Leo and David Sera. They are some of the best drivers in the world and to even be at the front of the field with them is a great feeling. I have looked up to these guys when I was a junior and now had the chance to race against the…and won!”

Daniel Formal would like to thank: DDF Racing Engines, Kosmic Karts, Advanced Karting and his dad and tuner Donald Formal.

For more information on Daniel Formal, please contact Donald Formal at 561.718.6840 or visit them online at www.AdvancedKarting.com