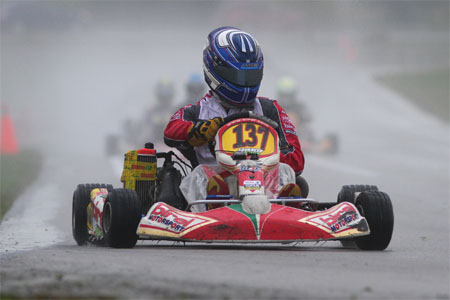 September 27, 2011 – After sustaining a broken hand just over a month ago and returning back to the track a short two weeks after, MRP Motorsport/Advanced Karting pilot Daniel Formal claimed a third place podium result at the 2011 Rotax Pan American Championship Season Finale. With support from K1 Race Gear and Birel Racing Karts, Formal was at the front of the field throughout the event weekend and never finished outside the top six in any official on track session.

“I love New Castle Motorsports Park,” expressed Formal. “The track has a combination of slow and technical corners and two monster straightaways. You need to have a good kart setup and some horsepower to run at the field and I was happy to come home with a podium result.”

After participating in the unofficial test days leading up to the event, Formal would be on track Friday for two official practice sessions and then qualifying that afternoon. With the flight system format in effect, drivers would start all three heat races in their qualifying position to accumulate points for prefinal starting positions.

With nearly thirty competitors from a host of different countries in the Rotax Max Senior field, Formal would steer his MRP Motorsports prepared Birel to a solid sixth place result in qualifying. Looking to move forward in the heat races, Formal would return to the track Saturday for a busy day of wheel-to-wheel competition.

Looking to remain consistent and take advantage of good heat race results, Formal would solidify a third place starting spot for Championship Sunday’s prefinal. On the heels of sixth, second and sixth place results in the three heat races, Formal showed the necessary speed to challenge for the overall race win and opportunity to be part of Team USA at the 2011 Rotax Max Challenge Grand Finals later this year in the United Arab Emirates.

Formal continued, “Saturday was a good consistent day for myself and the team on track. We managed to remain in the top six throughout all three heats and will be starting the prefinal from inside row two tomorrow.”

As teams and competitors arrived at the track for Championship Sunday, so did the nasty weather. With rain forecasted throughout the day, Formal and his team went on to perfect his wet weather setup and give him the best possible chance to stand atop the podium.

After starting from P3, Formal would look to stay out of trouble and set himself up for a good main event starting position. With a field full of regional, national and world champions, competition was fierce as the rain continued to fall. Formal, who is considered one of North America’s best karting drivers, had his kart on the edge throughout the weekend getting the most out of it in all weather conditions.

As dark clouds continued to hover over the New Castle Motorsports Park facility, rain continued to fall as the green flag flew for the Rotax Senior main event. Looking to fight for the race win, Formal would be pushed wide on the start of the race and fall back to the thirteenth position. Driving hard and determined to get back to the front, the Birel driver scored the fourth fastest lap time on route to a solid third place podium result.

For more information on Advanced Karting and DDF Racing Engines, please contact Donald Formal at 561.718.6840 or visit them online at www.AdvancedKarting.com. For press release and media information, please contact Mike Maurini and Race Tech Development at 317.270.8723 or via e-mail at Info@RaceTechDevelopment.com.