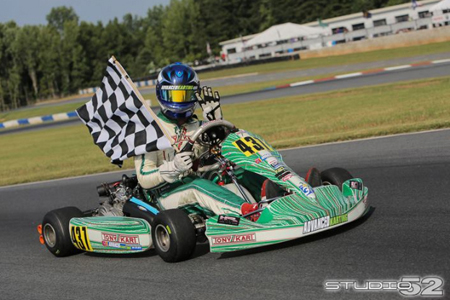 Taking to the picturesque GoPro Motorplex in Mooresville, North Carolina, Advanced Karting and 37RacingEngines hopes were high heading to the Rotax Max Challenge United States Grand Nationals. With national championships and Team USA berths on the line, more than 200 competitors would be vying for podium results and the chance to represent their country later this season at the Rotax Grand Finals in New Orleans. When the week finally came to a close, a familiar face was back on the top step of the podium as multi-time Team USA member Daniel Formal would dominate the Rotax DD2 division and claim his fourth United States National Championship.

“It was a long week,” explained Donald Formal, Owner of Advanced Karting. “The weather was changing and so were the track conditions, so we needed to stay on top of it all. Also, this was the first time that Danny and I would compete in the DD2 division. The learning curve was steep for us as a team but we managed to pull through.”

Formal was the class of the field in the Rotax DD2 class. After narrowly missing out on Thursday morning’s pole position, Formal took control when the wheel-to-wheel action commenced as he took the top spot in each and every on track session. Biding his time in the heat races on Thursday afternoon and Friday, Formal scored the pole position for Saturday morning’s prefinal where he went on to take the win. Turning up the wick in the main event, Formal secured the fastest lap of the race, a dominating victory and his fourth career United States Rotax national title.

“This is something that I have been striving to achieve,” explained Daniel Formal. “The DD2 national championship trophy will look good next to my Rotax Mini, Junior and Senior national championship awards. I am also very happy to represent Team USA at this year’s Rotax Max Challenge Grand Finals.”

Not only did Formal show the speed to win under the Advanced Karting and 37RacingEngines banner, Rotax Mini Max driver Neil Verhagen was also at the pointy end of the field. After showing speed through unofficial and official testing, Verhagen had to overcome some adversity in qualifying but managed to score a solid fifth place result.

Rotax Junior standout Jack Weprin was also one of the fastest drivers throughout the Grand Nationals week. Running at the front of the stout Rotax Junior field, Weprin was involved in a major incident at the start of Saturday morning’s prefinal. Classified 34th and forced to start the main event from that position, Weprin drove forward to claim a top-twenty result and will now shift his focus to the Rotax Pan-American Championships.

Advanced Karting, 37RacingEngines and Daniel Formal would like to thank Helio Rodriguez, Fernanda Demello, Tony Kart, Rotax, Maxspeed Group and the Weprin family for all of their efforts and support in the past month.