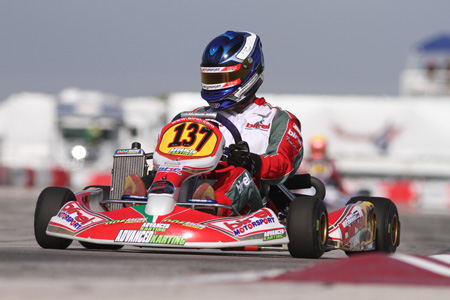 HOMESTEAD, FL (April 12, 2011) – When the final checkered flag flew at the 2011 Rotax Pan American opener at Homestead Karting this past weekend, the Birel America team had showcased the new RY30-S3 chassis in a dominating way. Jesus Rios, Jr. in his second event weekend with the team backed up his 2nd place result at the Florida Winter Tour Palm Beach event with an impressive double-win in the premier, Rotax Max Senior division setting the tone for the rest of the season.

Rios wasn’t the only driver making waves, however, as Danny Formal made the switch to Birel for the weekend and scored the pole position on the first day of competition. Louie Pagano also impressed the competition qualifying 3rd.

“We rolled out of the trailer strong this weekend,” said Tim Lobaugh, Engineer of MRP-Birel America. “We really showcased the RY30-S3 chassis in the hands of three different drivers.”

While qualifying was strong for the team, the trio of drivers really made their presence known in the Pre-Final, going 1-2-3 with Formal and Rios crossing the line within one-half second and Pagano close behind. The Final was much of the same, this time with Rios leading the way to take the win over Formal by less than a second. Pagano again crossed the line in third but was penalized 30-seconds for an infraction.

Sunday’s racing action saw Formal again qualifying on the front row in second but after a DNF in the Pre-final, he would have to start the Final from the back. Rios would go on to score the Pre-Final victory while Pagano would come from 13th on the grid to grab third at the line. For the Final, Rios again drove to a solid win, his second of the weekend. Formal, starting all the way in the back, put in an impressive drive through the field to place third, less than a .8 of a second out of the second place position at the checker.

In the MicroMax category, RYSA Racing driver, Justin Sirgany, scored a podium on the C28z chassis, placing 3rd in a tough field.